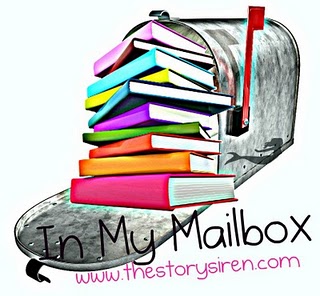 In My Mailbox is a weekly meme devoted to sharing the new books we’ve received, borrowed, or bought. For more information, visit IMM’s fantastic host, The Story Siren. You can visit other blogs that are participating in this week’s IMM here.

Since all but two Chicago Borders stores are closing, we decided to go browsing to see what kind of deals were happening. All books were 20-40% off, which normally would send me into a frantic tailspin of purchasing chaos, but I showed impressive restraint. I’m trying to keep my house from getting overrun with books, so I bought only the books that both my husband and I would read, or that I thought I could give away, either on the blog or to Half Price Books, the library, or some other such place.

The Sea of Monsters by Rick Riordan
The Titan’s Curse by Rick Riordan
The Battle of the Labyrinth by Rick Riordan
(Books 2-4 of the Percy Jackson and the Olympians series)
My husband is not a big reader. He’s pretty vocal about the fact that he’s read fewer than 20 books in his life. One notable exception to his “I hate reading” mantra is the Harry Potter series. When the Percy Jackson series became a movie, I bought The Lightning Thief to read, and he ended up reading it as well and loved it. When he saw the other paperback series books on sale, he jumped at the chance to read them. I was happy to encourage more book reading from him, so they came home with us.

Dead as a Doornail by Charlaine Harris
(Southern Vampire Mysteries #5)
Halfway to the Grave by Jeaniene Frost (Night Huntress #1)
The Judas Strain by James Rollins (Sigma Force #4)
My other motivating factor for buying at Borders was that many of the titles were cheaper in store than as ebooks. Normally, I almost exclusively buy ebooks simply because they’re cheaper. Dead as a Doornail is the next book I need to read in the Sookie Stackhouse series, and I’ve been meaning to check out the Night Huntress series, so I picked up those two. The Rollins book I’ve already read and is one of my faves in his Sigma Force series, which I didn’t happen to own yet in ebook form. I’ll definitely re-read this one many times over.

I also bought a few ebooks this week. It’s been a few months, and these were all books I’d been meaning to buy for a long time. As it turns out, I should have checked these purchases before my Borders spree.

Yep, that’s right. I bought Darkfever. You’ll notice that I also bought it from Borders this week. I’m an idiot.

City of Glass by Cassandra Clare (The Mortal Instruments #3)
I want to finish this one before Book 4 comes out on April 5th. I went ahead and bought it to remind myself to GET READING ALREADY!

Silver Borne by Patricia Briggs (Mercy Thompson #5)
My mom recommended this series to me a long time ago, and it quickly became my favorite urban fantasy series. Mercy Thompson is a Native American shapeshifter who can become a coyote at will. She is an auto mechanic who is tough, independent, but totally loveable. Her world involves fae, weres, vamps, and lots of suspense. It’s awesome. I also love the fact that she can have a love interest with some major spark and chemistry without sex scenes. I don’t always need my heroine and her man to get it on to make a compelling love story. Book 6, River Marked, comes out March 1st, so this purchase was another GET READING nudge.