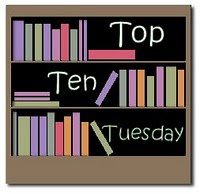 I love lists, so I’m excited to dip my toes in the listy fun that is Top Ten Tuesday. This meme is run by The Broke and the Bookish and each week they post a new list for us to complete and share.

Just post your own list, link back to The Broke and the Bookish, and add your link to the linky tool to participate!

These are the authors whose books I would buy or read, no matter what. I won’t say it doesn’t matter which genre, because even I can by finicky, but for the most part, these are authors who have proven to write books I consistently like, and who I trust to tell a great story (whether it’s fiction or not).

Â Though I mostly stick with his Sigma Force series, I’ve liked everything I’ve read by James Rollins.

Â I already own everything he’s ever written, and A.J. Jacobs is the only absolute “auto-buy” author I truly have. No questions asked, I will purchase anything he writes. Ever. His approachable, self-effacing style perfectly complements his journalistic eye for truths beyond face value.

Â Jen Lancaster is another humorous nonfiction author whose books I buy regardless of topic. Although her style can at times be over the top, she never fails to make me literally guffaw with laughter.Â

Â Though I have yet to even start this spinoff series, I’ve already preordered book 3. Enough said.

Â Mary Roach’s books are so well researched on such taboo topics that I can’t resist her. Dead bodies, ghosts, sex, space flight, and digestion – if you like the weird or hard to stomach, you’ve found your woman.

Â Mercy Thompson is one of the best shifter characters ever created. Patricia Briggs gets the series book just right – the characters never feel stale or stuck in perpetual loops of similar scenarios.Â

Â Is this cheating? I’ve never read the full canon, but I know that I will, and I would never hesitate to see or read a new adaptation.

Â I initially got hooked on the Sneaky Pie mysteries, but she now writes two other series (I’ve only gotten through one so far), and has a hefty collection of well-regarded literary fiction under her belt as well. I hope to read it all eventually.

After reading the River of Time series, I’ll read anything Lisa Bergren puts out there.

Who are your auto-buy authors?